Da 5 Bloods is streaming on Netflix 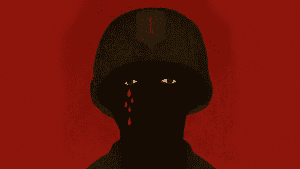 I’ve never served in the military. At the tail end of high school, recruiters from the Army bombarded my phone, trying to convince me to sign up for officer training school. What they didn’t realize, and what I only dimly knew at the time, was that I would have been an absolutely horrible soldier. There’s a host of reasons, but the main might be that I ask too many questions, and when you’re part of a chain of command, asking too many questions at the wrong time can get people killed.

That’s the real magic of film, though. As Roger Ebert wrote once upon a time, movies are machines for empathy. The right film can act as a portal into another person’s mind. I can get the smallest inkling of what it must feel like to be Black, or what it must feel like to watch your buddy die during conflict. It’s not the same as living through it, but it’ll have to do. 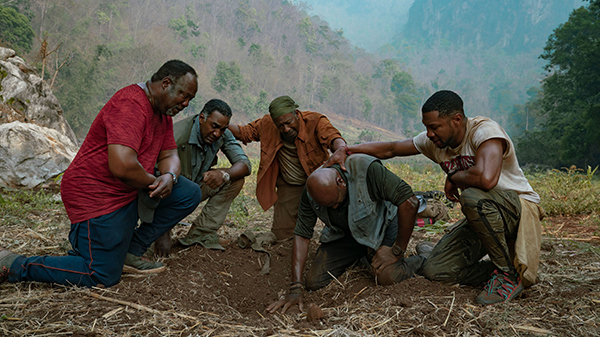 That’s one of the reasons I appreciate a filmmaker like Spike Lee. He’s one of our best, right up there with the Scorseses, Spielbergs, and Finchers of the world. He doesn’t make movies for me, yet he’s so skilled at creating a distinctive point of view that I can understand where he’s coming from without the benefit of his lived experience. So when Lee releases Da 5 Bloods, a movie that’s a war film, a heist film, a family drama, and a statement about how race informs and affects the various military adventures in our history, I take notice.

The Vietnam War rages on, and the Bloods rage with it. Technically, they’re part of the First Infantry Division, and they’re very, very good at what they do. The squad leader is Stormin’ Norman (Chadwick Boseman), a man they all look up to as a teacher, a father figure, and maybe the best soldier who ever lived.

The present day rages on, and the surviving Bloods rage with it. They have returned to Vietnam, to Ho Chi Minh City. There’s cool-headed Otis (Clarke Peters), who wants to reconnect with Tien (Le Y Lan), his former lover and the mother of the child he’s never met. There’s Eddie (Norm Lewis), who seems to be swimming in both money and good times. There’s Melvin (Isaiah Whitlock Jr.), who’s always got a quip locked and loaded. Oh yes, and there’s Paul (Delroy Lindo), who sees ghosts, grapples with PTSD, and proudly wears a hat supporting the man Spike Lee refers to as “President Fake Bone Spurs.”*

The Bloods have a mission and a mission. The first mission is to recover the remains of Norman and bring him home for the burial he’s earned at Arlington. The second mission will be a good deal more difficult: during the war years, a CIA plane crashed in the Vietnamese jungles; it carried a payment to the Lahu people for fighting against the North Vietnamese. The payment is millions of dollars in gold bars, and the Bloods think they know where it still is. 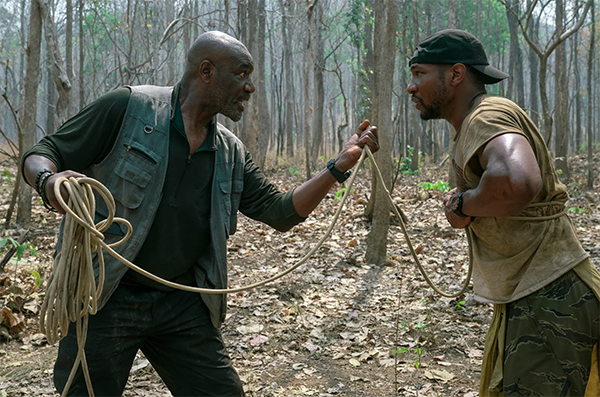 Things get more complicated with the arrival of David (Jonathan Majors). He’s Paul’s son, and to say their relationship is complicated is a hilarious understatement. Shady French businessman Desroche (Jean Reno) is happy to help smuggle the gold out of the country for the low, low price of twenty percent. It’s all in service to Norman’s original plan, one where the funds go toward a kind of reparations and a way to lift up the Black community. But plans have a way of changing.

You might think that since Spike Lee has directed a movie set in Vietnam and that grapples with the legacy of the Vietnam War, it would take more than a few cues from films like Apocalypse Now or Platoon. There’s a bit of that to be sure, but Lee has said for years that his favorite film is The Treasure of the Sierra Madre. Da 5 Bloods has more than a little of that film’s DNA. Lee has directed a film that’s personal, urgent, and that should be a lock for a Best Director nomination. Just look at the shifting aspect ratios that create four distinctive looks throughout the film. Cinematographer Newton Thomas Sigel teamed with Lee to bring beautiful and violent images to life. Check out the (as usual) outstanding music by longtime Lee collaborator Terence Blanchard, which is intimate, triumphant, and tragic. I should also mention Lee’s masterful use of Marvin Gaye songs from his What’s Going On album. Other than Martin Scorsese, nobody knows how to use music as effectively as Spike Lee.

The screenplay was originally written years ago by Paul De Meo and Danny Bilson, and Oliver Stone was going to direct for a minute. When Lee came on board, he and co-writer Kevin Willmott changed the aging vets from a group of white men to a group of Black men. This was a good move. On its face, the script is a fun and fast-paced riff on Sierra Madre and the corrupting influence gold has on the minds of men. Lee and Willmott are just as interested in the bonds between the Bloods, the ways that warfare never leaves the lives of the combatants, and the strands of racism and jingoism found since the beginning days of the American experiment. 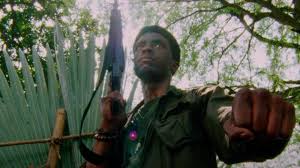 Lee is what they used to call an actor’s director, and he excels at giving his cast quality material and space to dive deep into strong performances. Everybody here is good, but there’s one person who delivers astonishing work, and that’s Delroy Lindo. No big surprise there, since Lindo has been showing up and crushing it for years. As Paul, he’s competent, macho, tough as nails, and suffering from enormous pain. He’s a physically big guy, and it’s fascinating to see how Lindo contrasts his size with his emotional depths. Whether he’s delivering a monologue directly to the camera, bonding with his brothers, or struggling with fatherhood, Lindo is willing to go to places that many other actors couldn’t. He’s one of our very best, and I hope he wins absolutely all the awards.

I’m glad Spike Lee is making movies, and I’m glad he made a film I was able to fall into so deeply. I think it’s a little too soon to call Da 5 Bloods a masterpiece. In time, that will likely change. For now, I’m content to call it one of the most essential and necessary films of 2020.

*It’s amazing how many real military heroes support a man who went out of his way to avoid military service.

Tim Brennan
Tim has been alarmingly enthusiastic about movies ever since childhood. He grew up in Boulder and, foolishly, left Colorado to study Communications in Washington State. Making matters worse, he moved to Connecticut after meeting his too-good-for-him wife. Drawn by the Rockies and a mild climate, he triumphantly returned and settled down back in Boulder County. He's written numerous screenplays, loves hiking, and embarrassed himself in front of Samuel L. Jackson. True story.
Tagged: Da 5 BloodsMovie Reviews
OnFargo.com is a directory and information guide for Fargo, North Dakota.
Discover the best of Fargo shopping, restaurants, night life, breweries, events, business, outdoors, fun, local life, real estate, transportation, jobs, and schools.
Looking for what to do in Fargo? OnFargo.com has columnists, and bloggers to keep you up to date on the best of Fargo, North Dakota.